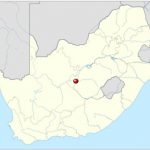 Through excellent connections, we – The management of Miracle of the Heart and the project leader of Eye for Others – suddenly had the opportunity to gain control over an old school and accompanying grounds in Ritchie. The property would be under our control for a 30 year lease term. The school was thoroughly dilapidated; though the roof and walls were still there, everything that wasn’t fixed or could possibly be unfixed was gone. Because we didn’t run financial risks by taking over the school in addition to the place having great potential, a decision was quickly reached; we were going to renovate the school.

Children would have much more space in this building and we’d create better facilities to safely harbor multiple groups of children.

In addition, the school offered lots of opportunities to pursue different projects in the future which would benefit the local community and, in turn, the children.

There was still a lot of work to be done though.

All kinds of organisations and people were mobilized. The end result was that, in july, a couple of farmers cooperated with some people from the local community to tidy up the grounds so that the group of volunteers would be able to get started on the (re)construction and renovation of the school. We made a planning for which tasks should be carried out in what order and made the decision that we would start with the renovation of one half of the school in 2015 and that we would begin working on the second half in 2016.

Those were the words our ambassador, Marisa Gerards, said after having fixed the very first solar light in one of our happy homes’ shacks. This marked the start of our Solar light project.

‘‘We did it’’ are my words at the end of 2015. Yes, though everything went completely different than formerly planned, the results turned out much better than anticipated. 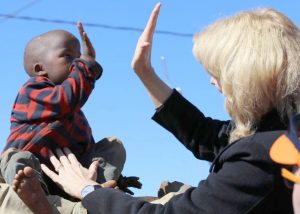 Together with Teresa Vorster and Riana van der Merwe (members of the Miracle of the Heart management) I spent the weeks preceding the arrival of the volunteers paying visits to service clubs, institutions and companies. The fruits of our efforts were significant. 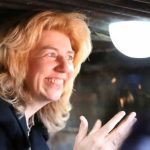 In the end we were able to use the incoming funds for the restoration of the school, the (partial) furnishing of the classrooms, the renovation of the lavatories and of the ten shacks in our happy homes project. In addition, we were able to provide 80 shacks with solar lights. These lamps are attached to the roof in such a way that they are impossible to detach and thus impossible to steal, or you have to take entire roof. The lamps charge during the day and are, afterwards, able to provide a shack with eight hours of light. They can also be used to charge mobile phones.

The shacks we picked to install these were ones that had no electricity. By providing these lights, kids are able to do their homework in the dark improving their engagement with school and ameliorating results. With the help of a last couple of donations we furnished the ‘‘school’’ (nursery) so that the kids would be able to make use of the renovated classrooms and newly constructed playground (courtesy of the volunteer group) which would both be ready after the holidays in week three of 2016. 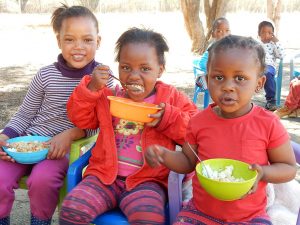 The first 85 children finished their pre-school education. We started out with only 26 kids in november 2015. This number grew and grew until in december 2016, 85 kids left the rainbow project ready and prepared for elementary school. A headmistress from Kimberley, engaged in our project and having worked with the children for a couple of days, she said to me that the children were pretty much on the ‘normal’ level of development for their age. This is amazing news because a lot of children coming from the townships lack a solid foundation. Hardly any games are played. Their parents are often unable to read or write. Some kids roam the streets and only come home for their one meal a day. If they’re fortunate, that is.

All previously planned activities have been carried out. We did change our energy supplier however; Eskom wanted to support us with a year of free energy. In turn, we postponed part of our Solar project to 2017 to make sure we do not offend this (state) supplier. Due to drought in our area renovating the sports grounds was harder than expected, fortunately we had enough time because of the prior shift in plans. Lastly we modified some of our plans concerning the restoration of the school, we were also able to buy more teaching material than expected thanks to the extra donations of South African and Dutch sponsors.

For 2017 we (Miracle of the Heart and Eye for Others) have created a new plan of action. The volunteers’ great involvement and enthusiasm has had an infectious effect on the local populace living in the Modderrivier municipality. We were able to cooperate with some (different) churches, the police and officers governing the municipality. On August 8th the municipal elections were held. We’ve established good connections with the two new counselors for Ritchie and Motswedi Mosa (Norman Hammer and Bonsile Makhamba). 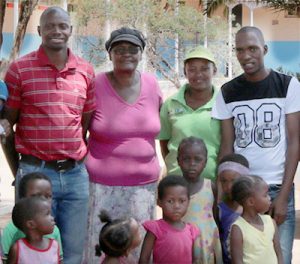 Together with the counselors and the communities of their respective townships we were able to renovate two shacks. This was carried out with much vigor and without display of banners, flags or any political expressions, which actually was a victory in itself. In 2017 we’ll be joined by groups of students and teachers, who’ll continue to work at the school complex, with the intention of eventually transforming it into a community development centre. The following groups will be assisting us in 2017:

A lot is happening both here and in South Africa. Our goal has always been to connect (young) people and to learn from each other. Hence our philosophy for 2017 and onwards: Circular Development Reinforcement, strengthening and developing each other perpetually. 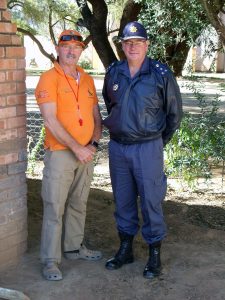 The South African concept of a community policing forum is best explained as something in between a civil guard and a police station. A CPF is made up of representatives of nearby institutions like schools, companies and churches working together with the police to ensure the safety of the local population. In Ritchie, the community has recently elected 16 people for this task without political affiliation. From january on they will be trained and educated by our police students in concert with young policemen from Kimberley and Ritchie. The training consists of; dealing with people; detecting problems; social skills; resolving minor predicaments; breaking up fights; providing immediate support for traumatized children; detecting (signs of) domestic violence, drug use, etc. The base new Ritchie Community Policing Forum is going to be situated on our property.

Harboring and properly guiding the disabled

In this region there are no facilities for people that are challenged in any way. It isn’t uncommon for these people to just sit around all day without distraction, having no access to the right sanitary facilities, specialized education or proper guidance. Our goal is that all non-specialized jobs at our community centre are going to be carried out by people with a disability. Jobs like guarding the entrance gate, cleaning, gardening, helping at the playground etc. We are going to cooperate with Yonder, an organisation situated in Kimberley (some 40 kilometres from Ritchie) who are already busy with educating and guiding people with a disability. Yonder owns a workshop in which 300 ‘‘people with opportunities’’ work. 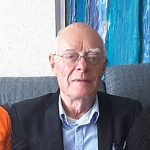 Adri Vermeer, professor emeritus of orthopedagogy at the university of Utrecht, visited Yonder for two days and has stated wanting to be involved in the development and construction of the program Yonder and us set up. Yonder is going to educate the people with disabilities that will come work for our project. From February on the Windesheim College students are going to work together with Yonder for an extended period of time to properly outfit our centre with the facilities necessary to harbor people with disabilities. 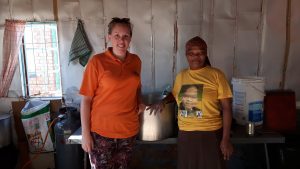 As previously said, in 2017 large groups of students will come to South Africa to share their knowledge, but also to learn something themselves from the local communities and organisations. We’re harboring the first students with locals; families who’ll gladly take two or three students in so that they, can learn about the community. In addition this will lead to a better, more understanding relationship between black and white. Young white people sleeping over in a township is unheard of. This will have an enormous positive influence. Safety is 100% guaranteed, locals will watch over these young people. This will spark a process in which people become more aware and more engaged with other cultures which, in turn, will lead to people being more empathetic to people that have different cultural backgrounds. 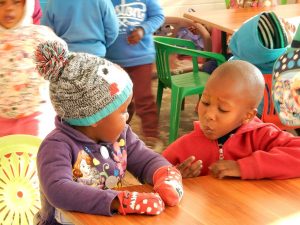 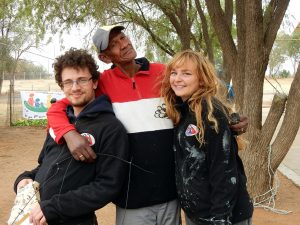 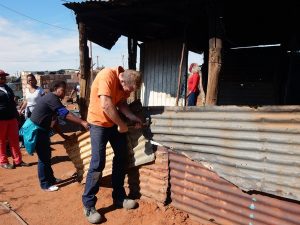 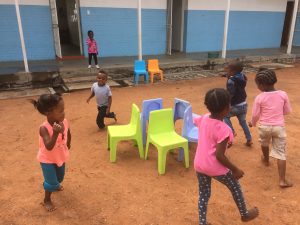 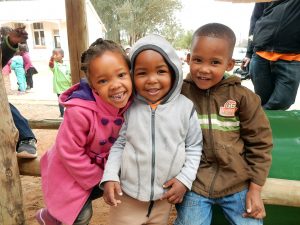 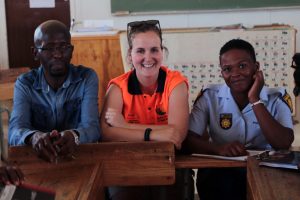 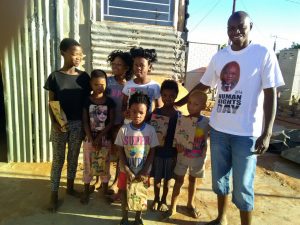 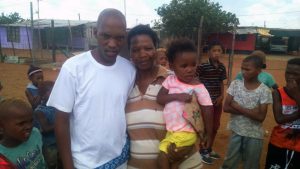 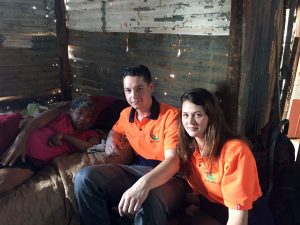 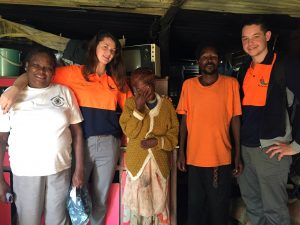 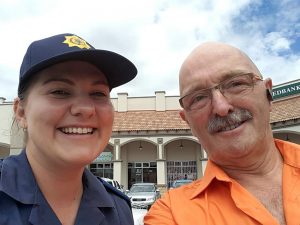 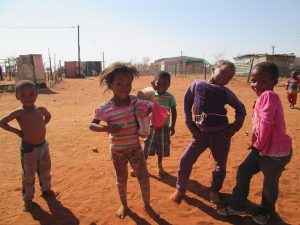 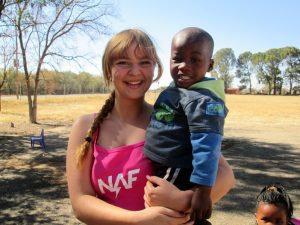 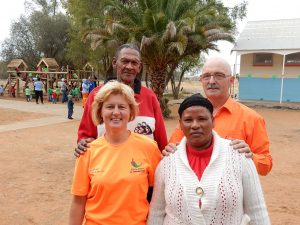 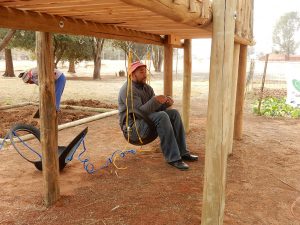 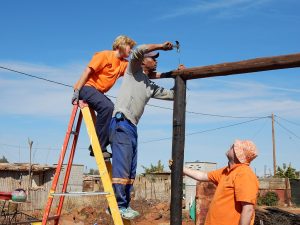 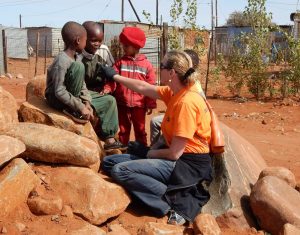 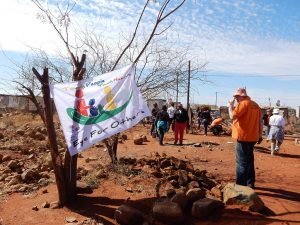 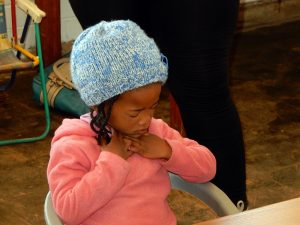